June 02, 2015
In the first part of the series I discussed minor architecture layout and began Installation discussions. This part two will further discuss the installation process and delve in some best practices architecture ideas.

What are your views on virtual appliances versus application installs on current build OS's?  Some individuals I have found need to have it on their installation of OS and others are fine with not using one of their licenses for this tool.  Put a comment if you have an opinion about that.

Either way the installation is similar as most of the configuration is performed after the initial installation.  Let's start with the vApp installation. 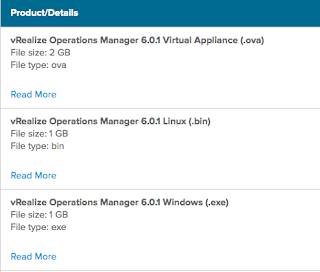 Enter in the credentials and download the product.  Make sure to get the 6.0.1 build as numerous fixes have been applied and it is a much better product version.  For reference here is the release notes for the 6.0.1 build. https://www.vmware.com/support/vrops/doc/vrops-601-release-notes.html 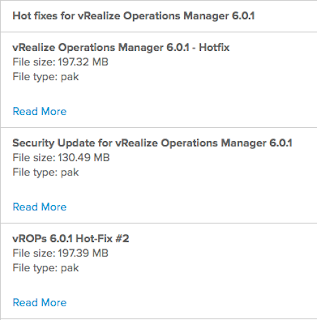 At the writing of this blog post hotfix #2 was available at http://kb.vmware.com/kb/2116366 and includes all previous hotfixes.  This will be discussed in later parts but is brought up here to get as well as the installation.  In the caption to the right, it is seen at the bottom of the list.

Sizing the environment isn't as simple as it would seem.  The install has three distinct sizes when it comes to the install. See the chart below:

Fixing your vSphere Replication after error.

PowerCLI get Hostname and IP for all VMs in environment

Why does powershell report an error

When I try and do a storage vMotion (svMotion) to an NFS datastore? I was running into an issue where a powershell one-liner: get-vm <GuestVMName> | Move-VM -datastore "NFS_Datastore" It reported that: The specified parameter 'Datastore' expects a single value, but your  name criteria 'NFS datastore' corresponds to multiple values.   Huh? And then I clued in that each ESXi host sees the NFS stores as individual datastores on each host. So I changed the script to this get-vm <GuestVMName> | Move-VM -datastore (get-vmhost <specific vmhost> | get-datastore "NFS_Datastore") And Voila, it works. the ( ) pin points which host's NFS store it should be talking to.